Windows 10 includes the Windows Subsystem for Linux (WSL), also known as “Bash for Windows”. This can be used to run AppImages on Windows. 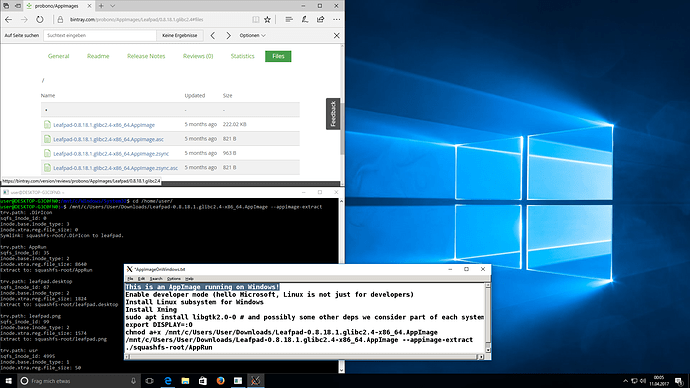 Microsoft has made it a bit harder than double-clicking a file, though:

If Linux wasn’t just for developers, we wouldn’t be telling people to open up a terminal just to run an app they’ve downloaded. Just saying that the mentality is that it is for developers.

Great work on getting this experiment working!

If Linux wasn’t just for developers, we wouldn’t be telling people to open up a terminal just to run an app they’ve downloaded.

You dont have to use a terminal.

Yep, but go to http://appimage.org and see what it says. To someone who doesn’t know otherwise, you do!

Yep, but go to http://appimage.org and see what it says. To someone who doesn’t know otherwise, you do!

That’s a good point. The homepage should explain both options rather than having the GUI solution only on the forum.

@probono I’d suggest the gif image here, be placed on the homepage before or beside the command option.

I guess the real issue is that desktop environments don’t handle ELF files that are lacking the execute bit not ideally:

If you care about this, please open an issue ticket with your favorite desktop environment and ask for ELF files that are lacking the execute bit to be handled more gracefully.

Hello sorry if thread is old. I am new for AppImage - I will learn about AppImage because I am initial for AppImage. That is nice like BoxedApp Packer for Windows - Nice idea.

I am trying to run QgroundControl (https://docs.qgroundcontrol.com/en/getting_started/download_and_install.html)

Would you please Help??

why do you want to run the AppImage on Windows? QGroundControl also has a native Windows version.

In any case, you will also need to install and set up an X server for the AppImage to work on Windows.

The QGroundControl AppImage apparently was made with an old version of the AppImageKit tools, and hence does not support --appimage-extract yet.

@probono, thank you, I installed QgroundControl for windows.

the terminal isn’t just for developers.

The terminal is useful for much more than just devs, unfortunately the classic fear of the terminal keeps many people from having access to many simple and powerful tools.